“This is our way of protecting the world”: The Telegram Fake Vaccination Card Economy

Roughly two years after the first COVID-19 outbreak in Wuhan, China, the world has made considerable strides toward achieving something resembling pre-pandemic normalcy. Many of the strictest travel restrictions have been lifted, and more and more businesses are operating at capacity and without curfews. Experts agree that the only possible way to continue making safe progress is when we can ensure everyone—or at the very least, a critical mass well above current levels--is fully vaccinated with an approved vaccine. The most common way to verify vaccination status is through physical cards given to everyone who receives a shot.

While some institutions have the technical capacity to check everyone in a database system, most verification is happening by hand, making fraudulent cards a real concern. Reports even suggest NFL receiver Antonio Brown may have used a fake card to fool the league into considering him vaccinated, suggesting that a sufficiently realistic document (or an insufficiently credulous authority) can allow for the circumvention of mandates with relative ease.

Marketplaces for fake vaccine cards have appeared across the social web, on major platforms like Facebook, Twitter, Instagram and Reddit. But one platform, Telegram, is arguably under-discussed in relation to this problem: the chat app harbors communities of tens of thousands of people exchanging fake vaccine cards for money, targeting at least a dozen countries all over the world.

Telegram as a Marketplace

That fake vaccination card economies would emerge on social media is not in itself surprising. Opportunists will always seek to capitalize on passionate mass movements, particularly those built around fear and anger; anti-vaccine influencers have long made money fostering vaccine hesitancy in plain view, hocking pseudo-scientific “remedies” for preventable diseases on mainstream social media platforms like Instagram and Facebook. Joseph Mercola, a prominent anti-vaccine influencer, has reportedly pocketed millions of dollars selling natural health remedies, and the media empire of prominent conspiracy theorist Alex Jones has a business model built largely around dietary supplements.

But fake vaccine cards are one content area where platforms have been willing, at least nominally, to draw a firm line; they are illegal in the US, carrying a penalty of up to five years in prison or $5,000 on the grounds that violators are fraudulently representing the CDC, a federal agency. Facebook, for example, says they have accordingly banned the sale and promotion of inauthentic vaccine cards (albeit with very mixed results).

On Telegram, a popular chat app that positions itself as technically powerful and privacy-conscious, no such stated rule applies; the company has not commented on investigations into their hosting of fake vaccine card channels. Telegram is distinct from the other platforms listed above in that it is a private messaging service, more akin to WhatsApp or Signal than Twitter or Instagram. The company has a reputation for taking a more hands-off approach to moderation—something a wide array of malicious threat actors have used to their advantage, maintaining large audiences with relatively little oversight or fear of bans. In such an environment, it is hardly surprising that a robust fake vaccine card economy would thrive.

Our investigation into the fake vaccination card market on Telegram shows that, at the time of writing, there are at least 10 such groups totalling over 76,000 members. At least a dozen additional channels with thousands more members appear to have been removed from Telegram, though it is unclear whether these removals were the result of platform action or by choice of the channel administrators.

The groups we tracked predominantly target a U.S.-based audience, with over half including a reference to either the U.S. as a whole, a particular U.S. state, or the CDC directly. However, at least one channel also includes references to the U.K.’s National Health Service (NHS) and has shared images of apparently fake NHS vaccination cards. 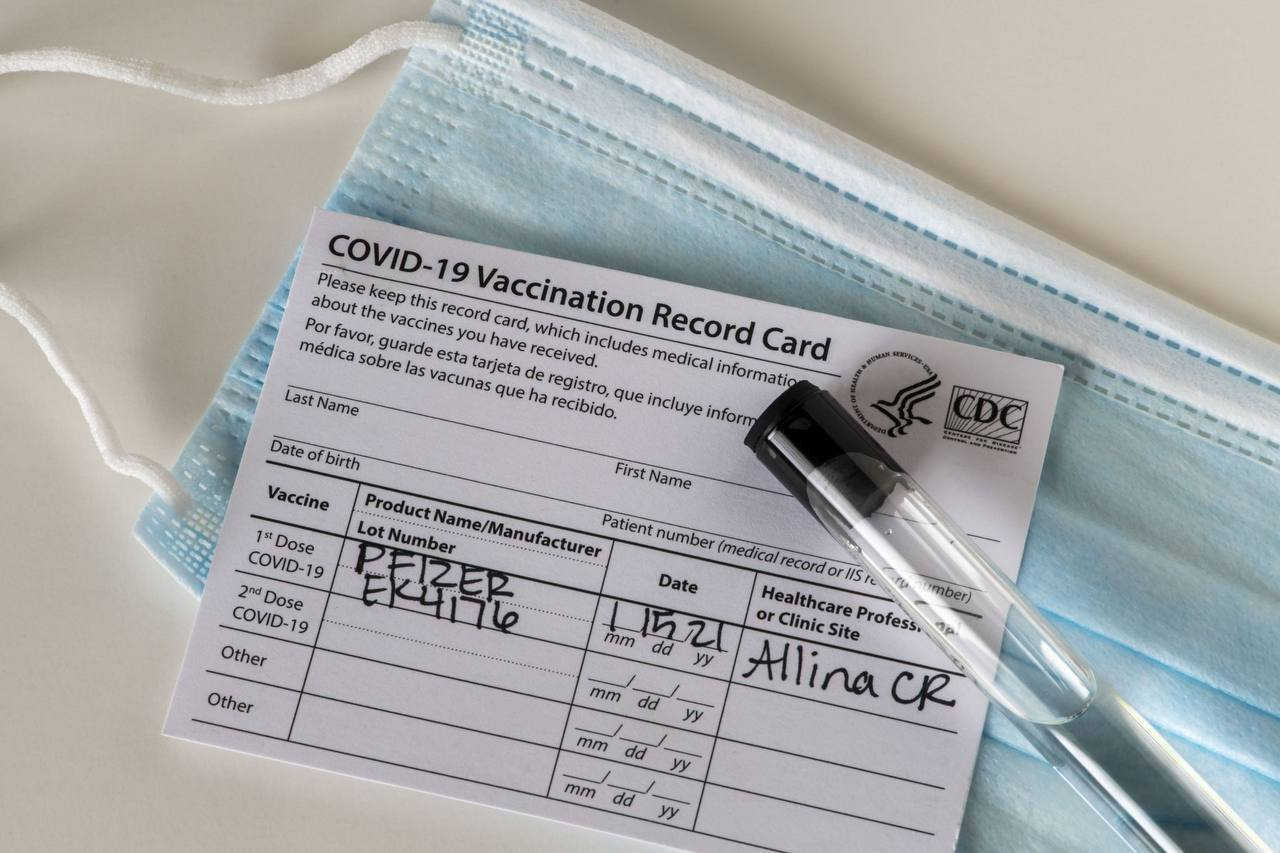 Typically, prices for supposed fake cards are not discussed openly in these groups; rather, administrators advertise individual accounts to get in touch with for “further inquiries,” so that details can presumably be discussed out of public view. According to cybersecurity company Check Point, sellers ask for payments in bitcoin and request far more personal information than would be required to produce a fake vaccine card.

Invariably, the primary emotion fake vaccination card peddlers exploit within these groups is fear, with vendors promoting the immediate “threat” of individual side effects (which are in reality incredibly rare) and concerns over perceived government overreach. Posts often include videos of unknown origin of people “convulsing,” with zero verifiable connection to the vaccine (shaking has not been identified by medical researchers as a COVID vaccine side effect). For anyone still debating whether or not to get the vaccine, fear of the consequences can be a powerful motivator not to get it. Increasingly, if the unvaccinated want to navigate the world truly uninhibited, they need a fake vaccination pass. 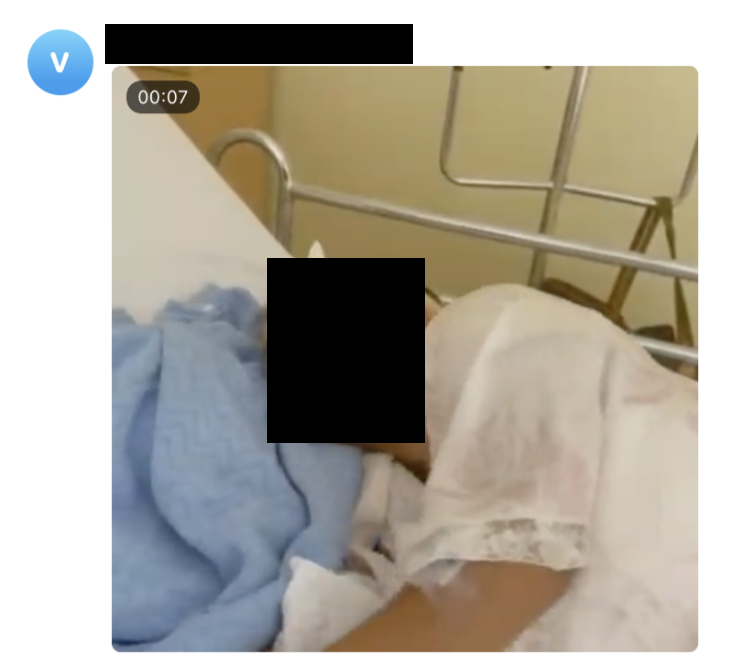 In the video above, a person is shown shaking. The video’s origins are unclear, and it has no known connection to a vaccine of any kind.

Beyond stoking unfounded fears about vaccines and downplaying the seriousness of COVID-19 itself, these groups present the fight against vaccination as deeply ideological, claiming theirs is a fight to “protect the world”. Whether sellers believe this genuinely or are simply trying to make money, these pronouncements of a moral battle can be highly effective at preventing people from getting vaccinated and seeding fake vaccination cards throughout the world.

Lastly, besides lying about the side effects of the vaccines and the intentions of health authorities, these accounts can blatantly misrepresent the effectiveness of their own grift. For example, a number of group admins have claimed that their fake vaccine passports will be updated in medical and government databases. If a buyer tests that extremely dubious claim in the real world and finds it lacking, the anonymity of Telegram leaves little recourse to even identify the seller, let alone hold them accountable.

Anti-vaccine ideologues have done a great deal of harm across the world, contributing to severe delay in pandemic recovery by helping slow vaccine uptake. But what makes the fake vaccine card economy especially dangerous is that ideology isn’t a necessary component of the motive to spread anti-vaccine disinformation and paraphernalia. Rather, it is in sellers’ market interest to drive people away from the vaccine such that their only option for many aspects of life -- travel, eating out, or even working — is to present fraudulent vaccine information, thereby lining their pockets. Fake vaccine cards are emblematic of the perverse incentives of largely unmoderated social media platforms, where anti-vaccine views are not only able to take hold, but are seen as a lucrative business opportunity.

Taking strong action against these channels is not simply a matter of battling provably false information, but an imperative for platforms to prevent serious harms. In settings where vaccination is required, people should be able to trust that those around them have genuinely diminished their chances of infecting others through immunization. Telegram and other platforms enabling these groups have a responsibility to create, publicly announce, and enforce strict standards against the advertisement and sale of fake vaccine cards.

Major brands are unwittingly funding disinformation domains. The GDI estimates that a quarter billion dollars (US$235 million) is paid annually to our database of 20,000 disinformation sites by ad tech companies placing adverts for many well-known brands.