Ask any disinformation expert about their greatest concerns for the coming decade, and it won’t be long before they bring up deepfake technology: AI-powered engines that can create highly realistic, moving mock-ups of individuals by mapping their facial features onto another person. And that concern is well-founded, given the proliferation of video manipulation technology in both playful and serious contexts — as demonstrated by recent viral deepfake videos.

But in focusing too much on advanced technology employed in disinformation, one risks overlooking more simplistic tactics that may be just as pernicious and even more successful in today’s digital landscape. In March, one of the most viral pieces of video-based misinformation was not a deepfake and wasn’t edited at all. Rather, by relying on preexisting disinformation narratives, opportunists were able to use a video from a real news organization to propagate the conspiracy theory that President Biden’s team relies on green screens to fabricate public appearances.

On March 16, President Biden met briefly with reporters to discuss potential plans for visiting the southern US border. The Hill tweeted out a video of the exchange in which Biden answers a couple questions on the topic. The comments did not prove especially newsworthy, and the tweet earned relatively little engagement throughout the day.

However, the post started gaining intense traction later in the evening. Several users pointed out that at one point in the clip, Biden’s hand appears to pass over a microphone in the foreground in a way that looked “unnatural,” suggesting the event may have been staged in front of a green screen. The post earned an uncommonly high ratio of quote-tweets to retweets, demonstrating a desire for people to comment about the video rather than simply share comments from the President.

Mentions of Biden alongside the terms “green screen” and “CGI” began to surge, peaking in the late morning of March 17 and maintaining at over 200 tweets per hour for several days. 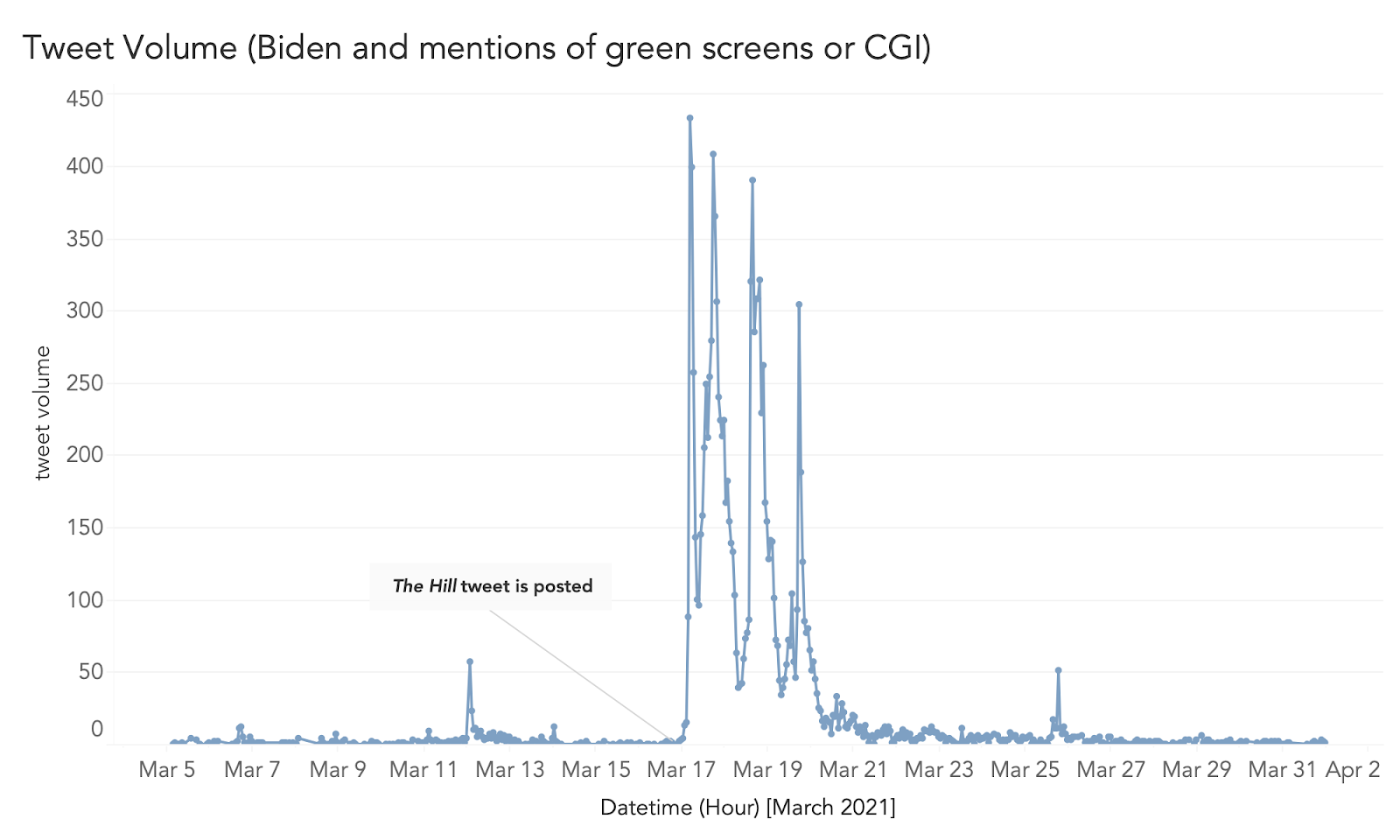 Video experts began to weigh in, saying that it’s possible because of angles and video quality. Fact checks appeared in Reuters, Politifact, Newsweek and elsewhere, citing those video experts, as well as journalists who pointed to video of alternative angles of Biden’s exchange with reporters. But good journalism takes longer than lies and misinformed speculation, and even the most efficient fact checks lagged behind huge surges in the “CGI Biden” discourse.

Why did it blow up?

To many online commentators, the narrative of the White House leveraging green screens and a “holographic Biden” seemed to appear out of nowhere. Do people really believe that “the real Joe” is being hidden, and that his team would conspire with media organizations to manufacture fake appearances? Almost always, large surges in disinformation do not burst onto the scene fully formed. Rather, they emerge from a petri dish of online narratives that have been waiting for the right conditions to thrive.

As disinformation researchers, we are often concerned with the peaks of post volume and engagement earned by false and misleading narratives. But a far more important metric for the long-term health of online discourse is a narrative’s “ambient volume” leading up to and following a surge in interest. Consider the search volume for “Biden” alongside “green screen” or “CGI” in the weeks leading up to the video from The Hill: 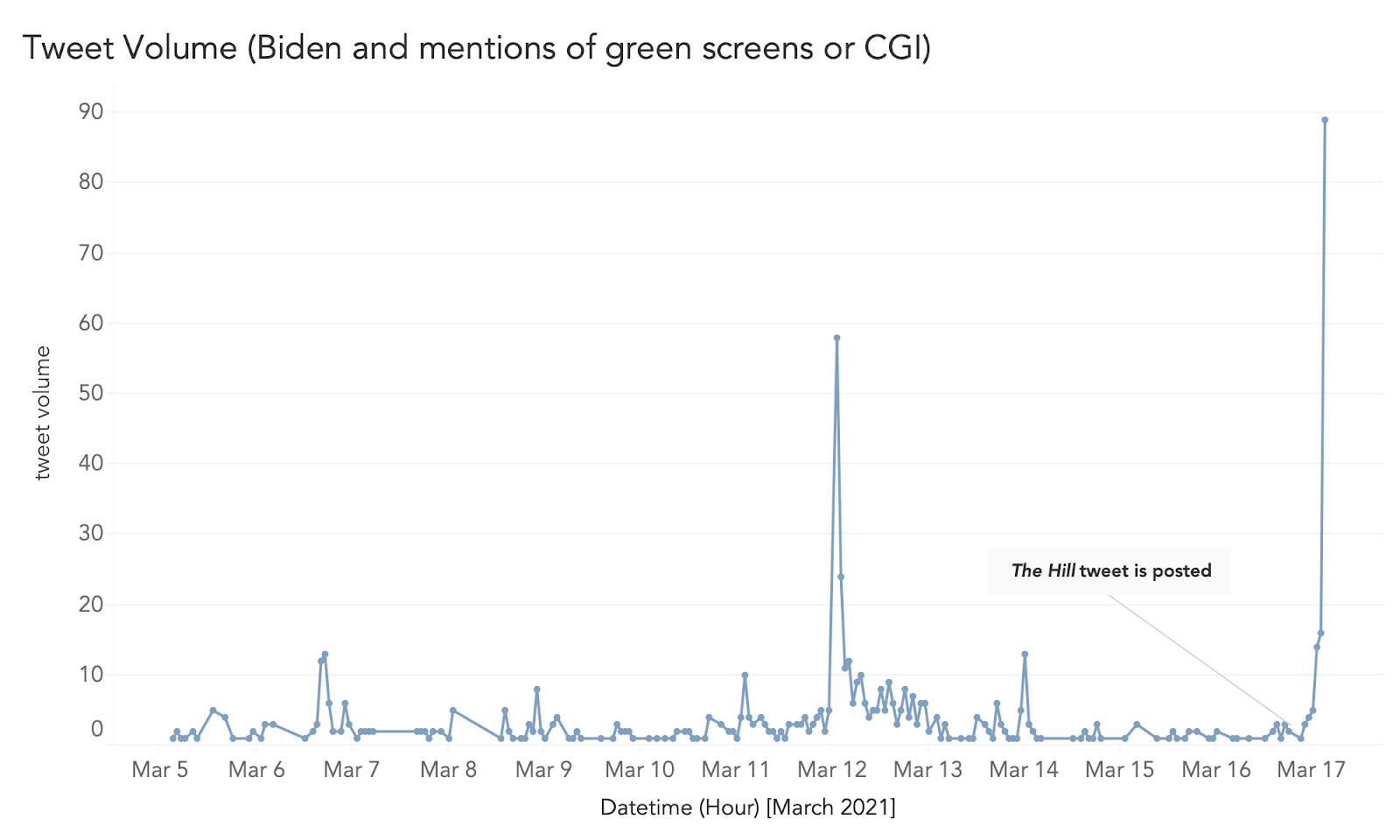 While approaching nothing near the levels of March 17th, these post volumes, ranging from dozens to several hundred tweets per day, represent a steady drumbeat of false information surrounding President Biden and deceptive video technology. A qualitative deep-dive into the posts themselves demonstrates a number of unsuccessful attempts to spread different supposed examples of Biden’s team employing green screens during public appearances.

While “CGI Biden” represents a specific bogus claim, narratives around Biden being “hidden” due to “mental decline” date back at least to the 2020 Democratic presidential primary when they found resonance online with leftists. After Biden secured the Democratic nomination and, eventually, the presidency, right-wing commentators picked up similar talking points. This is not to suggest there aren’t legitimate journalistic questions to ask around a president’s fitness for office or their transparency with the press — many of which were asked about Donald Trump, too.

But a number of malicious actors have taken these narratives to extremes, falsely suggesting that Biden has never appeared in public as president, is a hologram, or is portrayed by actors in masks. In context, the explosion of discussion on March 17 looks less like a sudden burst in a nonsensical narrative, and more like a pre-existing disinformation narrative finding a useful touchpoint.

This narrative serves as a reminder for researchers and journalists to closely monitor disinformation narratives both before they explode into public consciousness and long after they fade from view. While the volume of tweets on the topic of Biden and green screens sharply declined after March 19, it continued to earn dozens of tweets per day through the end of the month, doubling the daily rate from before The Hill’s video. It is only a matter of time before another piece of media, real or edited, is used to spread even more false information. 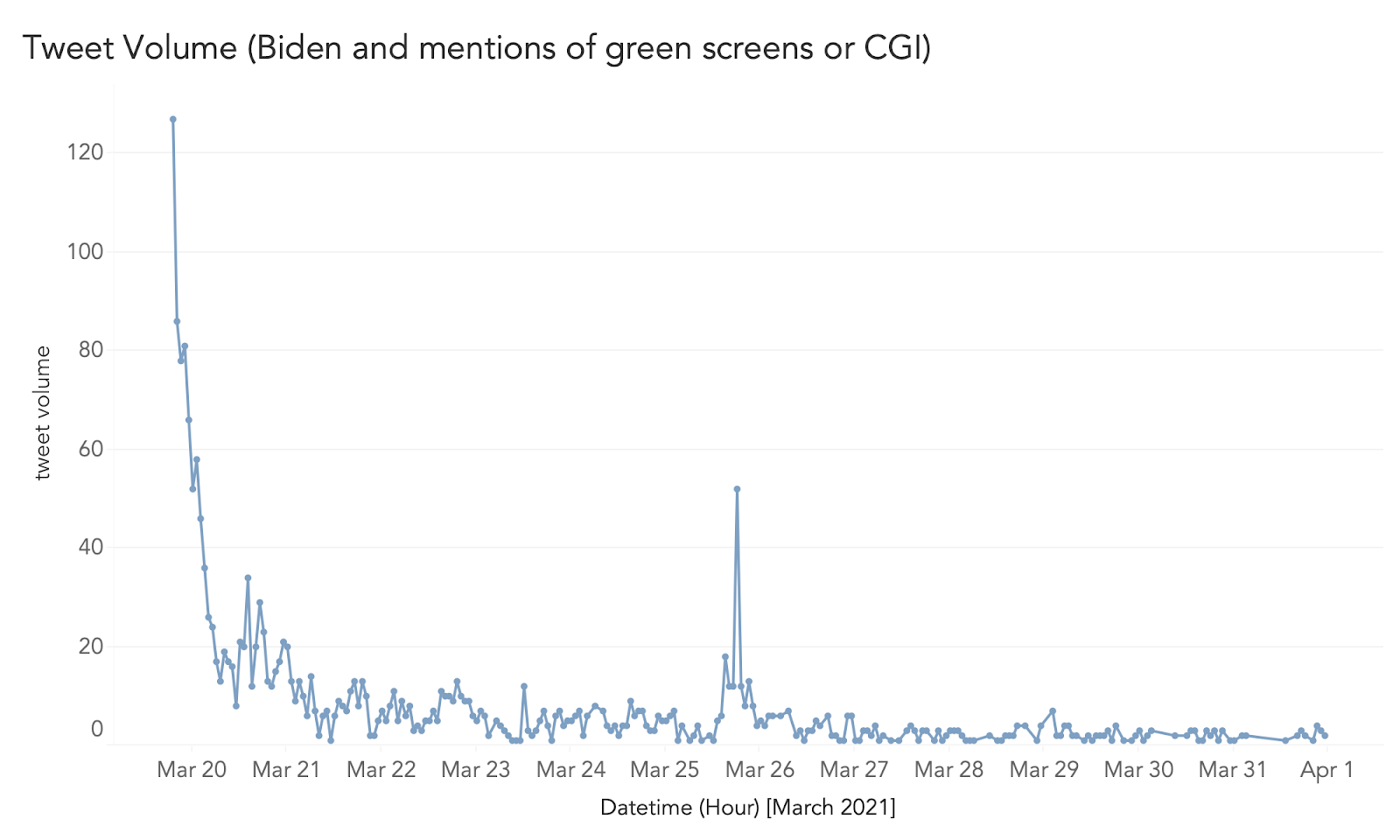 And what do we make of the fact that amid a great deal of furor around complex deepfakes, a short, unedited video was the source of so much false information? Advances in video technology have not only expanded what is possible, but also the collective imagination of what is possible. That imagination — the belief in what people are technically able and willing to do — may serve as the foundation of disinformation narratives more than any technology itself.