Bankrolling Bigotry: An Overview of the Online Funding Strategies of American Hate Groups

More than one-third of the platforms analysed do not have a policy which explicitly prohibits hate groups from using their services.

Hatred is surging across the United States. Figures released by the Southern Poverty Law Center (SPLC) suggest that the number of hate groups rose steadily between 2014 and 2018,1 including a 55% growth in the number of number of white nationalist groups active between 2017 and 2019.2 In 2018 the FBI announced that hate crimes were at the highest volume they had been for 16 years,3 and recent analysis from the Center for Strategic and International Studies identifies white supremacists as the most significant terror threat facing the US.4 This matches global trends where white supremacist terrorism has spiked by 320%,5 in part buoyed by a broad morass of hate against communities including Jews, Muslims, immigrants, people of colour, people with disabilities and the lesbian, gay, bisexual, transgender, queer and others (LGBTQ+) community.

This hatred has come to the streets over the course of 2020. As civil rights protesters have demonstrated across the country, groups such as the Proud Boys have incited hatred and participated in violent clashes. Such hatred threatens the safety, security and wellbeing of minority communities, and societal harmony writ large.

There is a clear need for greater efforts to be made to tackle hate groups. While these groups remain free to mobilise they can target minority communities with hatred and violence, as well as proselytise and recruit new members. 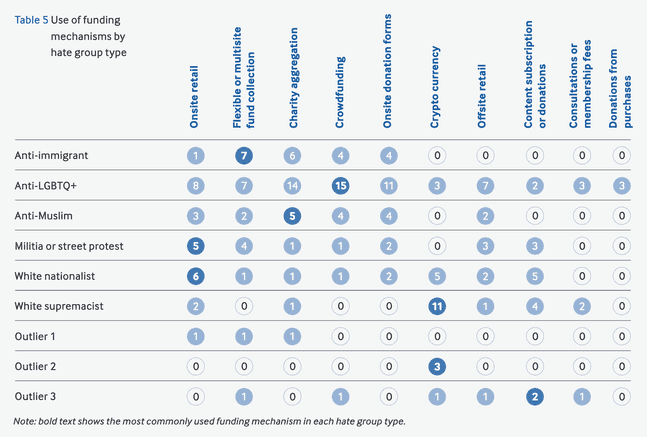 The struggle against these actors plays out in many ways. Civil society groups produce counter-messaging, which undermines the propaganda of hate; specialist practitioners work to de-radicalise individuals involved in extremist movements; and activists and academics build evidence bases and advocate for changes from social media platforms to improve and enforce their policies against hate-mongers.

The Business of Hate: Bankrolling Bigotry in Germany and the Online Funding of Hate Groups

The Global Disinformation Index (GDI) and Institute for Strategic Dialogue (ISD) have published a new study which shows how 17 known German far right groups and actors allegedly use 20 different online funding services to fund their activities.

GDI analysed informed online readers’ perceptions of disinformation risks for some of the most popular media sites in the United States.