In the lead up to the U.S. 2022 midterms GDI has been tracking ad-funded disinformation across a range of U.S. online news websites. Through the monitoring of these websites we have observed a variety of adversarial narratives that seek to undermine the integrity of the elections process. Some of these narratives have been present in the information ecosystem since the aftermath of the 2020 presidential election whilst others are more directly tied to the midterms.

Despite recent initiatives by the digital advertising industry to tackle disinformation, GDI continues to see a range of ad tech vendors helping to fund disinformation content related to election integrity.

GDI estimates that the 40 U.S. news websites on which election integrity disinformation narratives are most frequently published generate at least $42.7m per year in digital advertising revenue. This estimate is based on an average of 3 ads per page multiplied by monthly average page views, multiplied by an assumed average CPM (cost per mile). 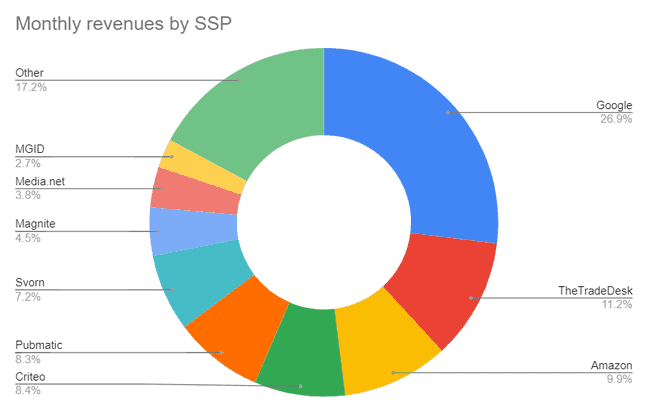 This revenue is generated through partnerships with ad tech suppliers (otherwise known as supply-side platforms or SSPs). In this specific study, GDI found 18 different ad tech suppliers providing services that help connect these publishers to advertiser demand. Although many of these suppliers have specific policies that prohibit the monetisation of disinformation, very few directly address election-related disinformation narratives.

While Google continues to be the main enabler of ad-funded disinformation, its share of revenue tied to elections integrity disinformation is lower than we have observed in past reports on other disinformation themes. This may be partly due to Google’s policy that prohibits “unreliable and harmful claims” related to elections, although our analysis suggests that significant enforcement gaps remain.

GDI calls for Google and all other ad tech vendors to address these policy gaps in order to eliminate digital advertising as a revenue source for publishers of disinformation.

In addition to estimating the funding of content that undermines the legitimacy of the elections process, GDI ran analysis to identify the most prominent disinformation narratives related to the midterms.

To understand the prevalence of these narratives and their relationship to each other we used an algorithm to perform semantic topic clustering. This algorithm uses the relationships between words and phrases to group news articles that share the same narrative into a common topic cluster. It also relates identified topics to other topics that exhibit some overlapping disinformation themes. The context provided by these relationships allows us to discover and track fringe conspiracy theories that are most likely to cross over into the mainstream. Examining the connection between narratives in this way can help those working to combat disinformation to stay ahead of evolving narratives.

The plot below shows the ten most prevalent adversarial narratives that emerged from the semantic analysis of disinformation content. Our analysis sampled 500 articles sourced from sites previously rated by GDI as high-risk for disinformation. The size of the bubble represents the prevalence of the adversarial narrative (e.g. the Rightful President bubble is bigger than the more fringe 2000 Mules narrative bubble) and the position of the bubble on the plot indicates the relationship of that narrative to other identified narratives (e.g. the Rightful President bubble is overlapping with the 2000 Mules bubble because the two narratives are highly intertwined).

The most prominent adversarial narrative observed is the Rightful President cluster is related to the idea that Donald Trump was the supposed “true winner” of the 2020 election. This topic ties together various conspiracy theories that GDI has observed moving from fringe social media platforms to more widely read media outlets. These can be loosely characterised as a movement to “take back America” whose central tenet is the idea that the U.S. is under attack. One prevalent narrative is the implication that the 2020 election signalled the beginning of the Democrats’ plan to seize control of the country. The House Select Committee on January 6 is therefore portrayed as an attempt to further solidify the “Big Lie” by denying the election of Donald Trump and undermining democracy.

This narrative displayed some overlap with Republican Safety and the tacit linking of the 2020 election to the “Great Replacement Theory.” GDI has tracked this theory as it has emerged from the political fringe and become intertwined with more widely held beliefs. The Republican Safety narrative cluster contains themes promoting the idea that the Democrats are "manipulating" electoral processes and results to “eradicate” Republican voters, aiming to replace them with a wave of “illegal” immigrants. This notion of “safety” has further bled into other prominent talking points that accuse Democrat policies of directly “harming” children through exposure to “dangerous” ideologies in schools.

The Rightful President cluster also overlaps with others that promote the idea that the 2020 presidential election was plagued by election fraud and that Biden is therefore an “illegitimate” president. Related to this GDI has tracked an increase in coverage questioning President Biden’s mental health and his ability to act as leader.

The Election Fraud cluster contains themes that have re-emerged in the lead up to the midterms such as those focused on vote harvesting and those questioning the accuracy and validity of voting machines. Examples of newer themes are those focused on electoral rolls and the idea that non-citizens and “illegal” immigrants are being allowed and encouraged to vote. This is seen as further proof of illegal activity linked to the belief that the Democrats are intent on changing the way in which elections are conducted.

The extension of this is the contention of certain actors on both sides of the political divide that election integrity can only be assured by having the “right people” overseeing the electoral process. GDI has noted disinformation from both the Left and the Right promoting the idea that failing to fill electoral administrative roles with people from that party will lead to election interference and a stolen result.

In summary, this type of analysis helps to identify the interrelatedness of different disinformation themes. Better understanding these narratives and their relationship to each other can help governmental and corporate policy makers to design and enforce policies that adequately address the most pernicious forms of disinformation.

This briefing previews results from the forthcoming report, Disinformation Risk Assessment: The Online News Market in the United States.

GDI Primer: The US (Dis)information Ecosystem

Overview for brands, advertisers and ad tech companies of the key US 2020 election disinformation narratives, the sites carrying these, and the ads funding them.